The paving was part of a timber bridge rehabilitation project performed by Mainroad South Island Contractingâs Bridge Crew as part of the British Columbia Ministry of Transportation & Infrastructure Service Area 01 Highway Maintenance Contract. Part of the rehabilitation project was to remove and replace the existing and badly deteriorated asphalt surface. After reviewing the project, the location and the timber surface, the decision was made to trial EZ Street Asphalt for the resurfacing material. The bridge deck is approximately 185 m long and 6m wide. Port Renfrew is approximately two to two and a half hours driving distance away from either Victoria or Duncan on Vancouver Island. In turn, it is also approximately two to two and a half hours driving distance from the nearest asphalt plant. The bridge is a single lane timber bridge with a timber bridge deck. The bridge is part of the main ring road around this area of Vancouver Island and must remain open to traffic at all times. The project had the ability to close the bridge to trucks and heavy traffic for one day only and this had to be planned and advertised to the public well in advance. The bridge takes a reasonable amount of logging trucks and other heavy traffic.

The paving crew utilized a small paver approximately 3 m wide. The project required the ability to keep controlled, one way light vehicle traffic crossing the bridge throughout the day. This called for the bridge to be paved in 2 x 3 m wide paver runs.

The weather conditions were not ideal for the utilization of regular asphalt but were ideal to demonstrate the benefits of EZ Street Asphalt for paving. The timber bridge deck was damp and wet in areas at the time of installation. No tack coat was used for the paving nor was it required for EZ Street Asphalt. The damp bridge deck would not have allowed the use of a tack coat.

There was a period of heavy rain during the paving. The rain was heavy enough that it would not have allowed regular asphalt to be used. EZ Street Asphalt is hydrophobic so is not effected by water at all and the paving progress was not halted or impacted due to the weather conditions.

EZ Street Asphalt is a cold product and does not require the paving equipment to be hot for the installation. This proved beneficial as the product was able to be transported to the site, held in trucks for a period of the day before being emptied into the paver without any deterioration to the product or any waste material. During the installation, a large fully loaded truck and transporter needed to cross the bridge. At this period only about two thirds of one run of paving had been completed. To enable the truck to pass, the paver moved off the bridge and the truck straddled both the EZ Street Asphalt and the unpaved section to cross. At this point, the EZ Street Asphalt had only approximately four passes with a roller. The truck passed over the site leaving virtually no impression on the brand new and virtually uncompacted surface.

The paver broke down for a period of time (about 1 hour) during the installation. This situation combined with the remote location and distance from an asphalt plant can cause significant issues when using regular asphalt and the temperature would be continuing to drop the longer it had to wait for the paver to be back in operation. Due to the location of this project the asphalt would have had to travel two to two and a half hours before getting to the site. This proved not to be an issue for EZ Street Asphalt or the paving operation as EZ Street Asphalt is a cold product that can remain waiting on trucks for almost a limitless period of time. In the instance of this project, EZ Street Asphalt had been produced three weeks earlier and had been sitting in stock pile awaiting the project.

EZ Street Asphalt Benefits over Regular Asphalt for this project:

In September 2012, Mainroad South Island Contracting LP, resurfaced Deering Bridge using EZ Street Asphalt as part of a bridge refurbishment project. This was the first section of road in Canada to be paved with 100% bio-fuel produced EZ Street Asphalt versus using regular fossil fuel based volatiles within the EZ Street product. The bio-fuel used for this production was produced from waste vegetable oil making the bridge surface one of the most environmentally friendly stretches of highway in Canada.

During the project assessment process, a number of issues and limitations were identified that made the use of regular asphalt inappropriate as the best surfacing solution for the bridge: 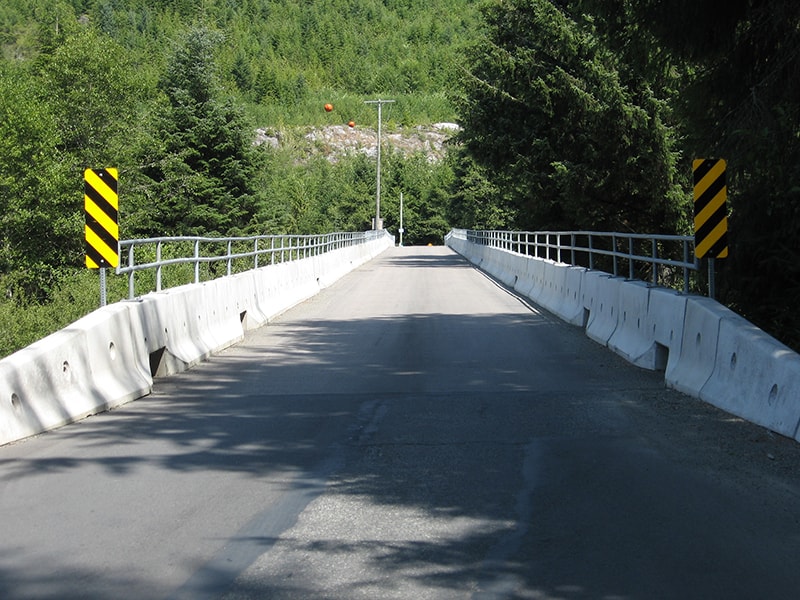 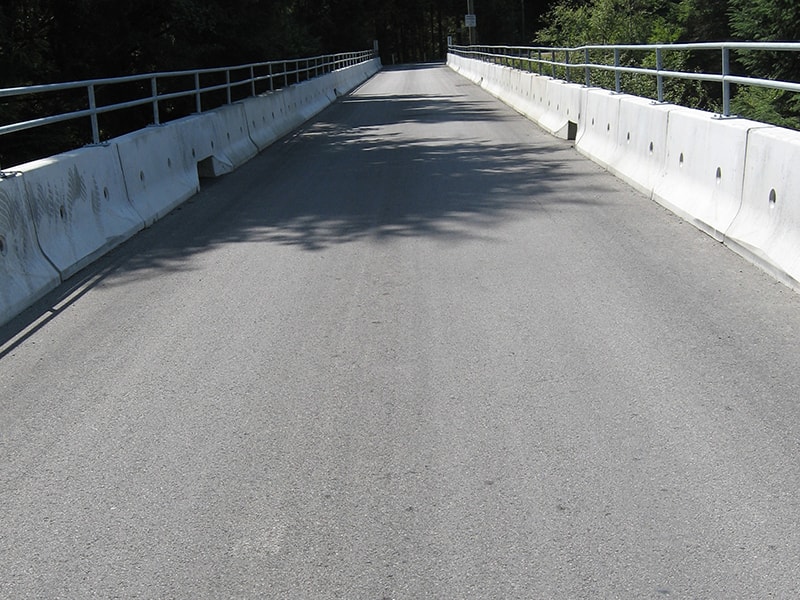 In August 2013, the Deering Bridge project site was visited for the purposes of assessing the bridge for surface deterioration and overall performance of EZ Street Asphalt. The main areas being assessed were to look for any cracking, rutting, surface texture issue or for any areas showing signs of deterioration.

It was first taken into account that this was the first surfacing project completed with 100% bio-fuel based EZ Street Asphalt. The bio-fuel mix is primarily utilised as a maintenance material for potholes, trench reinstatements and general patching mainly due to its enhanced workability properties and lower kinematic viscosity. In a normal situation, we would be using a mix with a higher viscosity for faster set-up and initial stability.

Overall, the bridge surface has held up to a very high standard and has exceeded our expectations. The majority of the bridge has maintained a stable surface with extremely limited hairline cracking which only appear in isolated spots where individual timbers are looser than others / too loose for 100% of its movement to be absorbed. For regular asphalt, we would expect to see significantly higher levels of cracking even over the most stable timbers.

EZ Street Asphalt has an in-built ability to assist with the reduction of reflective cracking on a pavement surface. Throughout its life, EZ Street will maintain a minute flexibility within its structure which will let it move and flex fractionally within a road surface and in this case the timber bridge surface. In these situations, the rigid surface provided by regular asphalt will result in fracturing and cracking quite quickly after the installation which will inevitably shorten the life of the surface.

There were two small sections on the central span of the bridge which turned into failures due to spongy sections of timber. We initially reviewed the sections for surface failure but eliminated a failure in the product mainly because the failures were isolated (if the product failed we would expect this to be across the full length and width of the bridge) and the failure type indicating a deeper issue as is seen in normal aggregate based pavements. When the sections were removed for repair it became very obvious that the failures were indeed caused by the underlying condition of the timber and not the surfacing material. It should be noted that these sections were replaced with new EZ Street product.

The solution and result provided by EZ Street on Deering Bridge has led to the product being used for an additional four timber and concrete slab bridges in remote areas of Mainroadâs South Vancouver Island Highway Maintenance Contract. Three Hill Bridge, Robertson West Bridge and Dry Bed Bridge all located on the Pacific Marine Route as well as Booth Canal Bridge on Salt Spring Island, BC. Overall, EZ Street has exceeded both the clientâs and the customerâs expectations and we expect to see a significantly extended surface life for the bridge deck.

Made with 100% renewable resources and select recycled materials, Bioblendsâ ¢ by EZ Street performs equally as well as its predecessor with the added bonus of a product that is uniquely green.